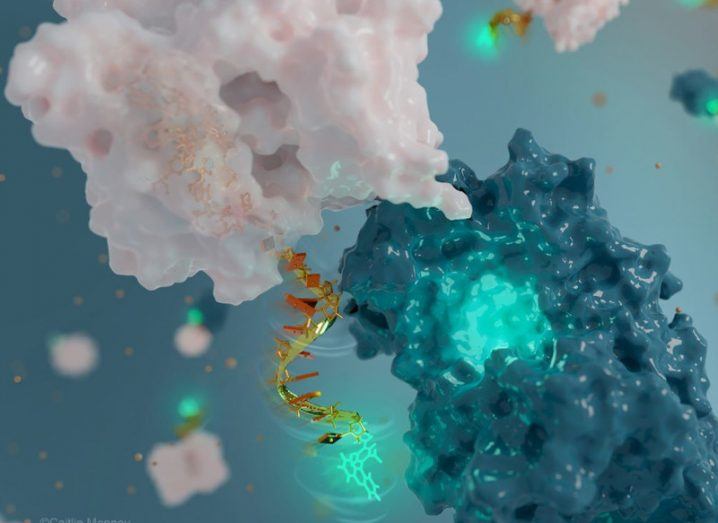 Researchers have developed what they describe as the world’s tiniest antenna made out of DNA, in a bid to monitor protein movements and learn more about nanotechnology.

Developed at the University of Montreal in Canada, the antenna is only five nanometres long and is made from DNA molecules that are roughly 20,000 times smaller than a human hair.

The nanoantenna is fluorescent and receives light in the form of colour, or wavelength. Depending on the movement of the protein it is monitoring, it reflects light back in another colour. Researchers can use this like a two-way radio to monitor protein movements in real time.

“One of the main advantages of using DNA to design these nanoantennas is that the chemistry of DNA is relatively simple and programmable,” said Scott Harroun, first author of the study, which was published in Nature Methods.

DNA synthesising technology was first developed more than 40 years ago and chemists can now use DNA to produce nanostructures of different lengths and flexibilities. The scientists believe these fluorescent antennas open new avenues in biochemistry and nanotechnology.

“In addition to helping us understand how natural nanomachines work or why they malfunction, leading to disease, this new method could promote the discovery of promising new drugs and guide nanoengineers in the development of improved nanomachines,” co-author Dominic Lauzon said.
The study has shown promising results and the DNA antenna was tested with three different proteins, demonstrating a versatility to its design. The researchers also detected the function of the enzyme alkaline phosphatase for the first time “with a variety of biological molecules and drugs”, according to Harroun.

“This enzyme has been implicated in many diseases, including various cancers and intestinal inflammation,” he added.

The study’s senior author, Prof Alexis Vallée-Bélisle, said the team is now working on setting up a start-up company to commercialise the nanoantenna and make it available for other researchers.

“Perhaps what we are most excited by is the realisation that many labs around the world, equipped with a conventional spectrofluorometer, could readily employ these nanoantennas to study their favourite protein, such as to identify new drugs or to develop new nanotechnologies,” Vallée-Bélisle added.