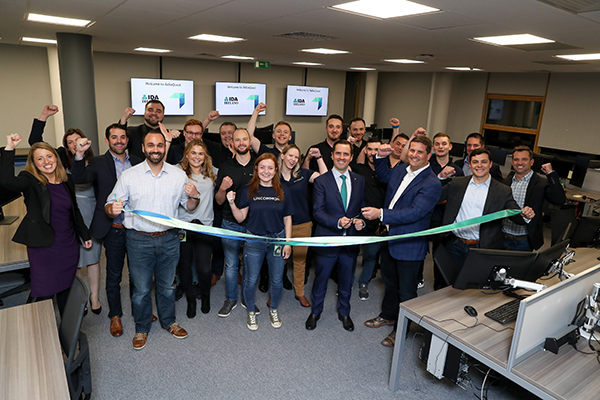 Company will create 100 jobs in Ireland over the next 3 years for security engineers, analysts and content developers.

DUBLIN, Ireland – Dec. 6th, 2018 – ReliaQuest, the leader in Security Model Management, today announced the grand opening of their 1st office location outside of the United States in Leopardstown, Dublin. Founded in 2007, ReliaQuest today employs over 300 staff across its 3 office locations in Tampa, Florida; Las Vegas, Nevada; and Dublin, Ireland. ReliaQuest plans to create 100 new jobs in their Dublin office over the next 3 years. These jobs will mainly be within their Security Operations Centre, consisting of security engineers, analysts and content developers.

ReliaQuest is supported by the Irish Government through IDA Ireland.

“We chose Dublin for several reasons, including its strong talent, the ease of travel back and forth from our headquarters in the US and around the rest of Europe, and the openness and focus on collaboration fostered by Ireland,” says ReliaQuest CEO Brian Murphy. “All of these things make Dublin a great place to be.”

Welcoming the announcement, Minister for Business, Enterprise and Innovation Heather Humphreys said, “I am delighted to see ReliaQuest open their first European office in Dublin. This will result in the creation of over 100 highly skilled jobs and they will join a growing cluster of cyber security firms already based here. This is an exciting announcement in an increasingly important sector and I wish them every success.”

Commenting on the announcement, IDA Ireland’s CEO Martin Shanahan said, “Ireland has become a significant base of international technology and security companies thanks to a growing, well-educated and flexible workforce with a rapidly increasing graduate output.  I am delighted that ReliaQuest chose Ireland to be the location for its international expansion.  As a committed member of the EU, overseas companies increasingly look to Ireland as a base from which to serve its customers in the region.”

Under Brian Murphy’s leadership, ReliaQuest has received numerous accolades for its commitment to focused growth while maintaining a positive company culture. In 2018, ReliaQuest was ranked one of FORTUNE Magazine's Best Workplaces in Technology, selected for Entrepreneur's Top Company Cultures list, ranked No. 214 on Deloitte’s Technology Fast 500™, and Murphy was chosen as one of Florida Trend's Florida 500 Most Influential Business Leaders of 2018. In 2017, ReliaQuest was listed as one of FORTUNE Magazine's Top 100 Medium Workplaces, and ranked No. 171 on Deloitte's Technology Fast 500™, a list of the 500 fastest growing technology companies in North America.

“We will double in size in all of our locations across the US and in Dublin in 2019 and continue that trend for the foreseeable future. We have a history of focused and rapid growth, and Ireland is a big part of that growth,” says Murphy.


About ReliaQuest
ReliaQuest has worked to reshape the cybersecurity industry by helping enterprise security teams rethink their reliance to any one technology, automate security outcomes, and elevate the security team within the enterprise. ReliaQuest leverages a discipline called Security Model Management to help organizations configure consistent security models that evolve over time. By combining existing tools and technologies with ReliaQuest’s proprietary technology, people, and process, ReliaQuest transforms organizations into their own security platforms. The result is unmatched visibility and optimized security spend.  ReliaQuest operates 24 hours a day, 365 days a year from Security Operations Centers in Tampa, FL; Las Vegas, NV; and Dublin, Ireland.  http://www.reliaquest.com/