Trinity researchers shed light on the ‘spiders from Mars’ 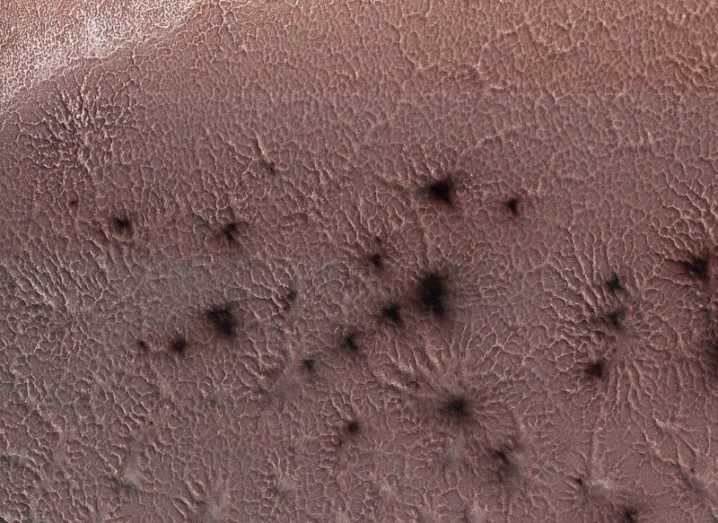 Researchers at Trinity College Dublin (TCD) have shed new light on the ‘spiders from Mars’ – not a David Bowie backing band, but a unique topographic feature on the planet’s surface.

These spider-like channels, more formally referred to as araneiforms, are strange-looking radial systems that resemble the branches of a tree or fork lightning. They are not found on Earth but are believed to be carved into the Martian surface by CO2 ice changing directly from solid to gas – a process known as sublimation – as the seasons change.

A team at TCD, along with researchers at Durham University and the Open University, conducted a series of experiments at the Open University’s Mars simulation chamber to investigate whether patterns similar to Martian araneiforms could form using dry ice sublimation.

Their findings are published in Scientific Reports.

“This research presents the first set of empirical evidence for a surface process that is thought to modify the polar landscape on Mars,” said Dr Lauren McKeown, who led this work during her PhD at Trinity and is now at the Open University.

“The experiments show directly that the spider patterns we observe on Mars from orbit can be carved by the direct conversion of dry ice from solid to gas. It is exciting because we are beginning to understand more about how the surface of Mars is changing seasonally today.”

The researchers drilled holes in the centres of CO2 ice blocks and suspended them in the Mars simulation chamber with a claw, similar to those found in arcades, above a bed with different grain sizes. They lowered the pressure inside the vacuum chamber to Martian atmospheric pressure and used a lever system to place the CO2 block on the surface.

When the block reached the sandy surface, CO2 turned directly from solid to gas. In each case, once the block was lifted, a spider-like pattern had been eroded by the escaping gas. These patterns were more branched when finer grain sizes were used.

Until now, it has not been known if such a theoretical process is possible and this process has never been directly observed on Mars.

Dr Mary Bourke of TCD’s Department of Geography, who supervised the PhD research, described it as “innovative work”.

“[It] supports the emergent theme that the current climate and weather on Mars has an important influence not only on dynamic surface processes, but also for any future robotic and/or human exploration of the planet.”

There are currently several space missions in progress that could tell us more about Mars in the future. NASA’s Perseverance rover successfully touched down on the surface of the planet last month, and is tasked with collecting geological samples that can be returned to Earth for research.

Meanwhile, the UAE’s Hope mission and the Chinese Tianwen-1 mission have both arrived in Mars’ orbit.