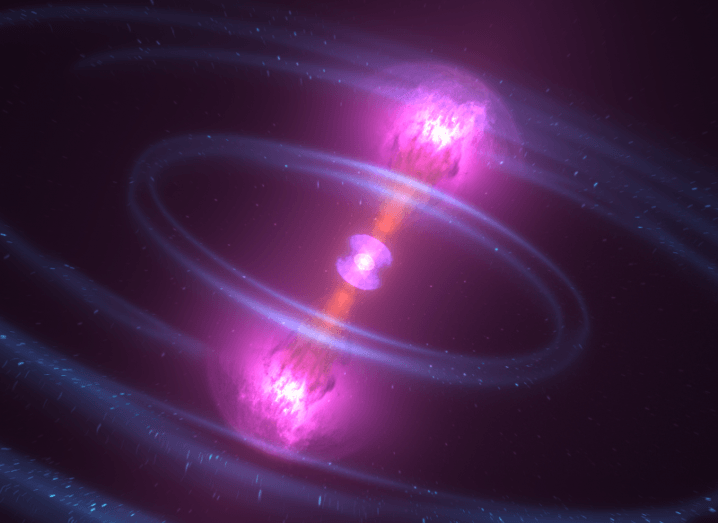 Researchers at Queen’s University Belfast claim to have identified the origin of some of the heavier elements of the universe by analysing the results of a neutron star collision.
Heavy elements such as gold and platinum are dispersed throughout the universe in the aftermath of these cosmic events.
Prof Stephen Smartt from Queen’s led one of the international teams that, in 2017, hit upon a massive discovery by studying a 100m-year-old collision of two neutron stars, proving that the smash-up produced a burst of gravitational waves.
This collision emitted an intense beam of gamma rays that ejected some of the heaviest-known elements in the universe. Since the cosmic event was spotted in 2017, researchers around the world have been working to identify which specific elements were created.
Queen’s researchers under Smartt’s supervision have detected the elements strontium and zirconium from their extensive analysis of the data. They also found elements from the heavy lanthanide group, such as cerium and neodymium.
The elements were detected “through signatures imprinted by their atomic lines”, PhD student James Gillanders explained.
Gillanders led the Queen’s team, which collaborated with researchers from the Free University of Brussels and the GSI Helmholtz Center for heavy ion research in Darmstadt to produce a comprehensive atomic data set. They then turned to the Northern Ireland High Performance Computing (HPC) Centre, located at Queen’s, using the data to calculate computer models of how light interacts with elements heavier than iron.
“This research helps to show that these exotic mergers are responsible for producing many of the heavy elements that we see around us in the universe today,” said Gillanders.
The team now hopes to find a few more of these collisions to study and model in a similar way to reach a “reasonable sample size”.
However, Smartt said that neutron star mergers are “relatively rare”.
“But the information we have been able to gather since our discovery has been invaluable – it has helped to solve some of the big questions around the origin of heavy elements in the universe,” he added.
This research has been published in the Monthly Notices of the Royal Astronomical Society.
Leigh Mc Gowran
This article originally appeared on www.siliconrepublic.com and can be found at: https://www.siliconrepublic.com/innovation/neutron-stars-elements-space-queens-university-belfast