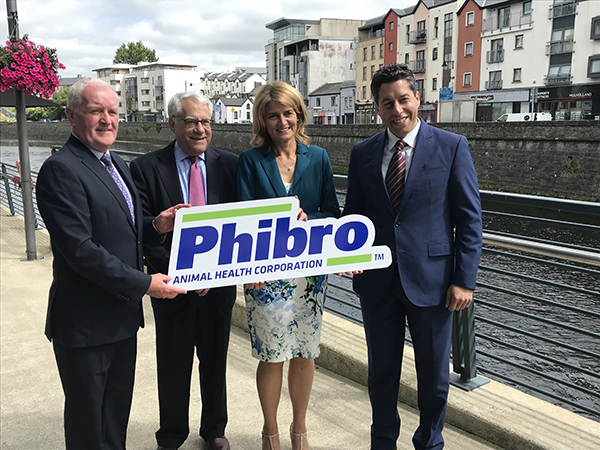 The project is supported by the Irish Government through IDA Ireland.

Phibro develops, manufactures and markets a broad line of animal health and nutrition products for poultry, swine, cattle, dairy and aquaculture customers around the globe. The company had $764 million in annual sales in over 65 countries during its most recent fiscal year and employs over 1,400 people globally. Phibro is a publicly traded company headquartered in Teaneck, New Jersey, United States.

The Sligo plant will be the company’s first biologicals manufacturing location in Europe and will allow Phibro to expand its presence in Europe.

The new manufacturing facility will initially focus on producing Phibro’s innovative line of vaccines for the treatment of a range of poultry diseases for sales globally. In the future, Phibro expects to expand production to include vaccines for livestock and aquaculture.

Making the announcement in Sligo today, Minister for Agriculture, Food and the Marine, Michael Creed T.D, said, “This significant investment by Phibro is a great vote of confidence in Sligo, and will offer even more opportunities for local residents and communities to grow and thrive. It further strengthens Ireland’s Life Sciences capability in the North West and builds on a series of new IDA projects announced for Sligo and elsewhere in the region over recent times. The Government is tirelessly working to achieve job creation in locations which are away from the main cities, and this new biotech facility in Sligo is testament that the policy is working.”

Welcoming the announcement, Minister for Business, Enterprise & Innovation, Heather Humphreys TD, said, “I was delighted to see Phibro announce that their first biologicals manufacturing location in Europe will be in Sligo, creating up to 150 highly skilled jobs. This has been a fantastic few weeks for Sligo with announcements from Abtran, E3 Retail, and Live Tiles, showing how the county is benefiting from both indigenous and FDI investment. This is another example of the success of our commitment under the Regional Action Plans for Jobs to ensure we have the right conditions in place to encourage job creation in regional locations.”

Speaking at today’s announcement, Jack Bendheim, Phibro’s Chairman, President and Chief Executive Officer, commented, “The creation of Phibro Ireland marks an important milestone in our development as a leading global player in the animal health biological market. The winning combination of Phibro’s expertise in the development and manufacture of biological products, the driven and experienced workforce available in the Sligo area, and the strong support of the IDA makes us very excited about the potential of the Sligo facility.”

Speaking at today’s announcement in Sligo, IDA Ireland’s Executive Director Mary Buckley said,  “This announcement of a new company into Ireland, which is a global leader in diversified animal health and nutrition, is great news for Sligo and the North West Region. IDA is committed to winning investments for regional locations across Ireland and the North West Border Region is a key area of focus for us. The 150 jobs being created by Phibro will significantly benefit the regional economy. I wish you and your team every success here and will follow your progress with interest.”

The new roles will include management, quality analysis, quality control, regulatory, engineering, operators and maintenance staff. For more information on the new roles email hr.sligo@pahc.com.
While not immediately material to Phibro’s business, the company believes Sligo-produced products will meaningfully contribute to financial results over the next 3 to 5 years.

About Phibro
Phibro Animal Health Corporation is a diversified global developer, manufacturer and marketer of a broad range of animal health and mineral nutrition products for use in the production of poultry, swine, cattle, dairy and aquaculture. For further information, please visit www.pahc.com.