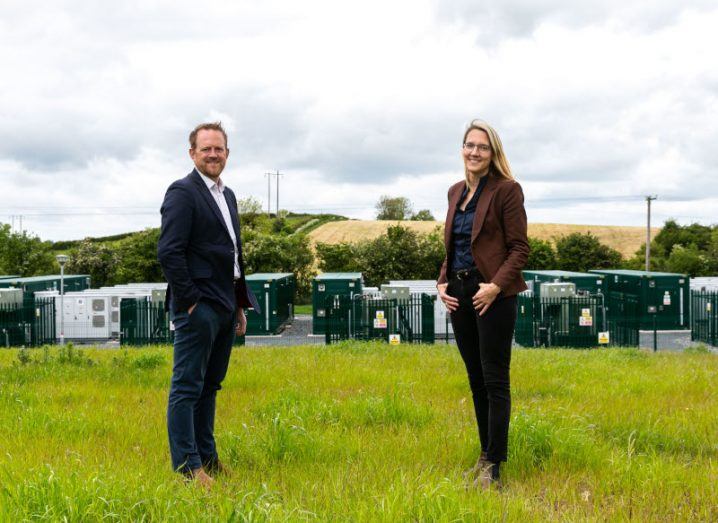 A new €25m battery storage project is now operational in Lisdrum, Co Monaghan to help maintain stability in Ireland’s power grid.
Built by German multinational energy company RWE Renewables, the 60MW facility is intended to provide the rapid delivery of electricity into the power grid to help balance intermittency in electricity generation.
It also aims to provide a short-term backup to address power outages and maintain a more stable and secure electricity supply in Ireland.
The Lisdrum facility is RWE’s second and largest battery storage project in Ireland. Last April, the company launched an 8.5MW battery storage project in Balbriggan, Co Dublin.
“Ireland is an excellent starting point for RWE Renewables as we look to expand and grow our battery storage technology business and become a key partner in Ireland’s low-carbon energy transition,” said Cathal Hennessy, managing director of RWE Renewables Ireland.
With a presence in Ireland since 2016, RWE has two offices in the country – one in Kilkenny City and another in Dún Laoghaire.
RWE has been making significant investments in Ireland. In May 2021, it selected Bangor Erris in north Mayo as its first site to test the potential of airborne wind energy technologies. Overall, the company has plans to invest €1.5bn in Ireland over the next eight years.
It also said that a planning application was submitted earlier this year for the 62MW Lyre 0nshore wind farm in Co Cork.

Wind energy and electricity
News of the new Lisdrum project comes at a time when Ireland’s reliance on wind energy for electricity has been rapidly rising.
In June, Wind Energy Ireland released a report which found that wind energy provided 34pc of Ireland’s electricity in May 2022 – up 9pc on May last year. So far this year wind has provided 37pc of Ireland’s electricity.
“Irish wind farms have delivered enormous amounts of clean energy over the first five months of the year, cutting our carbon emissions and helping to insulate Irish consumers from our dependence on expensive imported gas,” said Noel Cunniffe, CEO of Wind Energy Ireland.
“We expect to see new wind farms connected before the end of 2022 and with solar farms connecting to the grid this year for the first time too, the two technologies will increasingly be able to work together to push fossil fuels off the Irish electricity system.”
However, Cunniffe warned that significant delays in the planning system are slowing down the rate of connection of new wind farms, with average time for a decision now over a year.
“Our planning system must be urgently reformed and properly resourced to ensure that the renewable energy projects needed to cut our carbon emissions and drive down electricity bills can get built as quickly as possible,” he added.
Vish Gain
This article originally appeared on www.siliconrepublic.com and can be found at: https://www.siliconrepublic.com/machines/rwe-renewables-monaghan-lisdrum-battery-storage-project