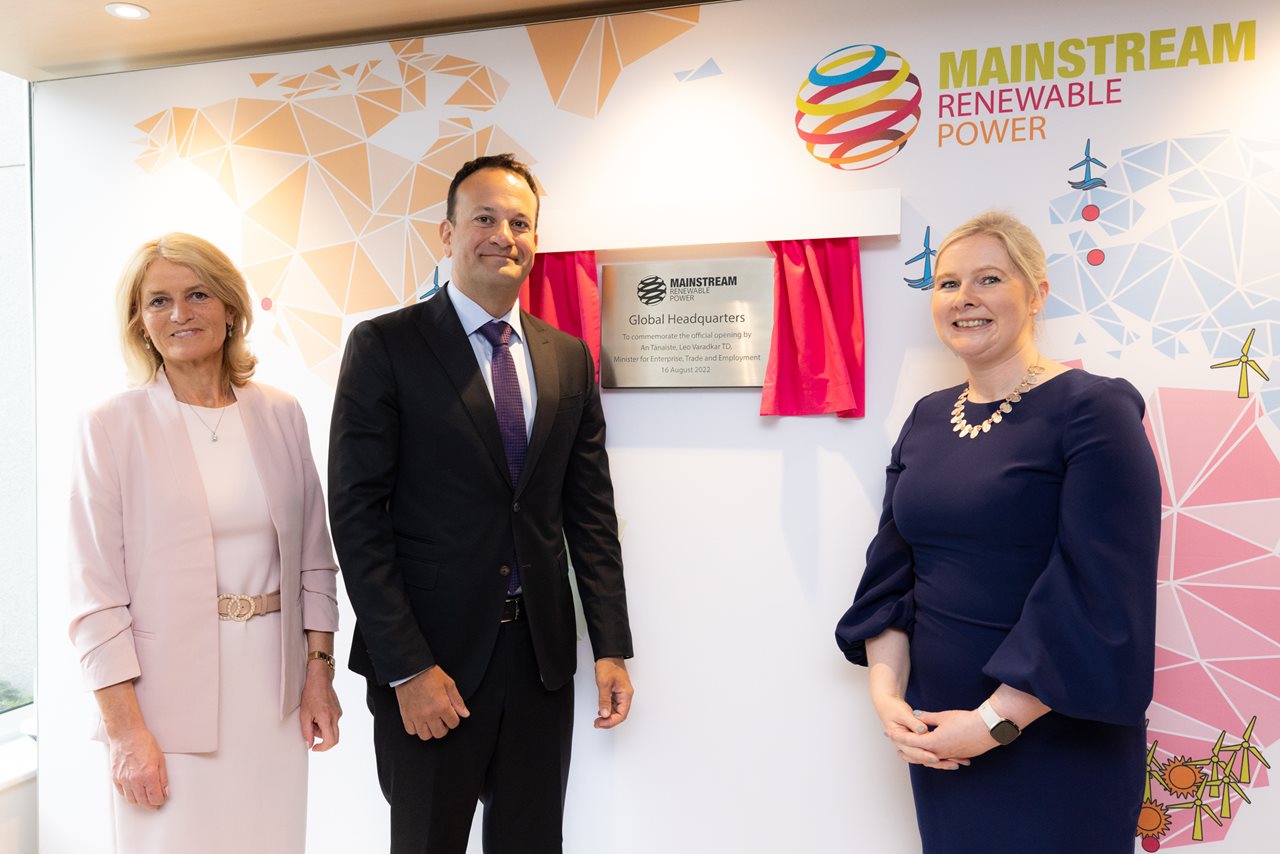 Dublin, 16 August 2022 – Global renewable energy leader Mainstream Renewable Power has today announced plans to create over 100 new jobs at its global headquarters in Dublin by 2025, to support its international growth strategy along with its offshore energy development plans for its home market in Ireland.

The 100 new full-time jobs, which Mainstream will look to fill before the end of 2025, follow unprecedented growth in renewable energy development across the globe and the continuing increase in demand for renewable energies as the world transitions away from fossil fuels that accelerate climate change, with Mainstream on course to become one of the world’s first renewable energy majors this decade.

In support of its national and global growth plans, Mainstream Renewable Power has opened a state-of-the-art new office campus at the Central Park business park in Leopardstown, Dublin, which will be home to the company’s expanded team of over 200 head office employees by the end of 2025.  This is on the back of a period of unprecedented growth with Mainstream’s global workforce having increased from 335 in January 2021 to over 650 people today, across 20 markets globally.

The expansion of Mainstream, which was founded in Ireland in 2008 and continues to have a strong Irish shareholding, coincides with the company’s re-entry into its home market where it is currently developing three sites off the East, Southeast and West coasts of Ireland, with plans for significant offshore wind energy developments at each location that are designed to support the Government's carbon emissions targets for the electricity sector by 2030.

Mainstream’s offshore team, which is best known for developing the world’s largest offshore wind farm at Hornsea in the UK, is in the process of conducting early-stage development activities on its target sites in Ireland and is commencing its engagement with key local stakeholder groups including fisheries, port authorities and other community groups.  Across the globe, Mainstream’s offshore team is developing offshore wind projects in Norway, Sweden, Vietnam, Japan and South Korea.

Mainstream’s global operations is led by Group Chief Executive and Irishwoman Mary Quaney, who has overseen the rapid growth of its global portfolio that now extends to 27 GW, roughly five times the size of Ireland’s peak electricity demand of 5.5 GW.

Commenting on Mainstream’s growth plans, Mary Quaney said, “While we are a global renewable energy company with presence across 20 markets worldwide, Ireland is very much the engine room of our business, we’re extremely proud of our Irish heritage led by our local management team. Our expansion here in Ireland, and our journey to becoming a renewable energy major will provide a unique opportunity for new team members that we bring on board over the next year to make a hugely positive difference in the energy transition and industrial decarbonisation, domestically and internationally.”

Speaking about Mainstream’s plans for Irish offshore wind development, Mary Quaney added, “Ireland has very significant and in many ways unique offshore wind potential, and we are currently progressing opportunities for fixed and floating technologies off the East, West, and South coasts. Given our roots within the Irish energy market, we plan to leverage the vast expertise and capabilities that we have developed internationally over the past 14 years to help build a state-of-the-art renewable energy system and a local supply chain to support it, all while providing investment, jobs and other meaningful benefits to our local communities.”

Commenting on Mainstream’s expansion, Leo Varadkar, Tánaiste and Minister for Enterprise Trade and Employment, said “Ireland has huge potential for offshore wind generation. Our coasts give us a natural advantage and I see us becoming a net exporter of electricity and energy over the next couple of decades, giving us greater energy security and price stability. It will also create thousands of jobs in communities, especially coastal communities, across the country. It’s a great vote of confidence in that vision that has Mainstream Renewable Power deciding to invest further here, creating 100 new jobs in Leopardstown. I visited the company’s offices in Chile and Colombia earlier this year and saw first-hand the incredible work the team does on a global scale. I’m excited to see what the team achieves here.”

Mary Buckley, Executive Director, IDA Ireland added, “Mainstream has evolved into a world class energy development company that is breaking new ground and positively transforming energy systems across the world. Today’s jobs announcement is great news for Ireland and those that wish to play a role in supporting Ireland’s transition to a low carbon economy, and we’re particularly excited by Mainstream’s plans to partner with local companies as part of its ambitions to contribute to the creation of a local supply chain that brings value back to local communities.”