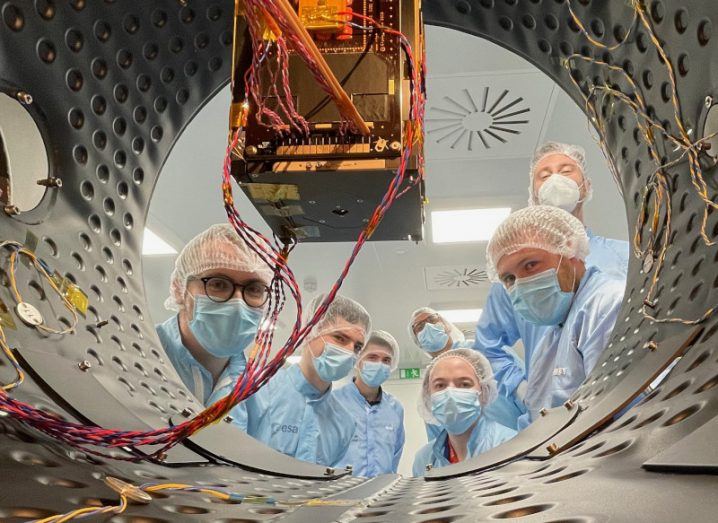 UCD
The Government is making a €125m commitment to the European Space Agency (ESA) over the next five years. This investment is expected to further support the expansion of Ireland’s growing space industry.

It was announced by Minister of State for Business, Employment and Retail Damien English, TD.

English is attending an ESA meeting in Paris to agree on future policies and strategies. Here, he confirmed Ireland’s investment in the ESA’s mandatory programmes as well as a number of optional ones.

The Minister said this comes at an “exciting time” as Ireland’s first satellite, EIRSAT-1, is set for launch next year.
The miniature cube satellite has been designed and built by researchers and students at University College Dublin as part of the ESA’s Fly Your Satellite programme.

“The science, technology and innovation demonstrated by the launch of our first satellite provides an opportune moment to highlight to our citizens, students and enterprises why investment in space technology and activity, through our membership of ESA, is so important and how it can be a catalyst for further growth in our economy,” English said.

Space for growth
The commercial space industry is estimated to grow to about $1trn by 2040, and Ireland is looking to gain a share of this market.

The Government’s increased investment in the ESA is part of a national strategy set out in 2019 to develop a space-active industry in the country.

The number of Irish companies engaged with ESA contracts has grown from 70 in 2019 to 97 this year, and it is hoped that the further funding over the coming years will help businesses and researchers seize even more opportunities.

English said this will help sustain current jobs and create new ones.

“Last year saw 14 Irish companies secure their first ESA contract, almost half of which did so having previously worked with our ESA Business Incubation Centre,” he added.

“Building on that growth will be key for our country as we seek, like other countries, to deal with the challenges and impacts of climate change, the energy crisis, the lasting impact of the pandemic, and the impact of the Russian invasion of Ukraine.

“The Irish Government recognises the potential that space activities, technologies and space-derived data offers to enable us to tackle these challenges now and in the future.”

Ireland has been a member of the ESA since 1975. In that time, Irish industry and researchers have been part of a number of high-profile missions.

There was Irish involvement in perhaps the biggest space development of 2021 – the launch of the James Webb Space Telescope.

While researchers at the Dublin Institute for Advanced Studies worked on some of its instruments, Irish start-up Réaltra developed a video system for the telescope’s launch vehicle.

Irish companies Mindseed and OceanEnergy secured an ESA contract last year to investigate the use of space tech in renewable ocean energy, while Davra and Treemetrics have received ESA backing to work with Earth observation data.

“Irish companies continued to offer innovative solutions to the global space sector in 2021, particularly through the inclusion of advanced technologies from other industrial sectors which are addressing pressing global issues,” said Enterprise Ireland’s Joe Madden, who is part of the national delegation to the ESA.

“The scope of Irish involvement in space-related activities has increased substantially, with close to 100 Irish companies and a growing number of research teams actively involved in space-related developments supported by ESA, through Enterprise Ireland.”