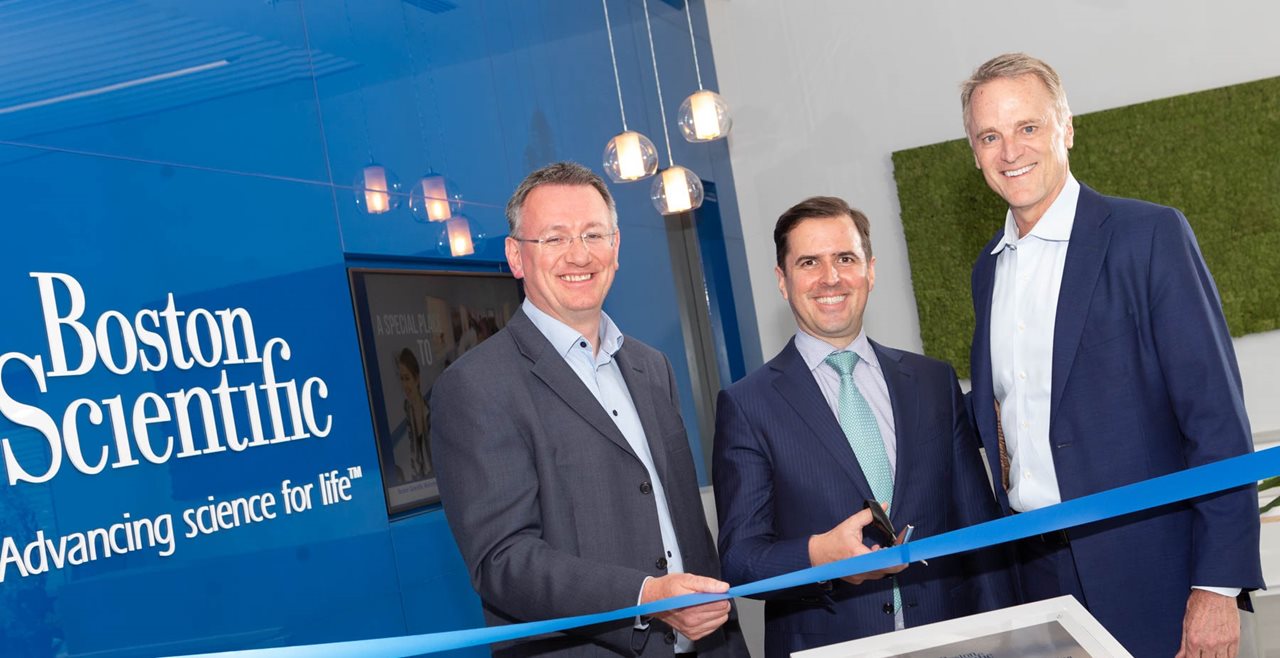 Boston Scientific Galway has officially opened a new facility at its Ballybrit site. The expansion facilitates increased capacity to support global product demand and also includes an industry-leading Equipment Technology Centre. The new facility is at the site of the former Digital building and the company is investing €60M is this phase of development, with over 250 people expected to be based in the new facility by the end of 2019. Boston Scientific Galway has a workforce of over 3,700 people covering all aspects of product design & manufacturing exporting more than four million life saving medical devices each year.

The company began operating in Ireland in 1994 with less than 30 employees. Today it has a workforce of over 5,700 across three Irish sites, at Clonmel, Cork and Galway. Mike Mahoney, Chairman and CEO of Boston Scientific officially opened the new facility and at a special town hall meeting attended by almost 800 employees, he acknowledged the importance of the Galway site to the company by saying “The opening of this new facility reflects our ongoing commitment to Galway and Ireland. Our highly skilled workforce has made a significant contribution to the development of many innovative medical solutions, with our Galway site playing a key role in products in areas such as Interventional Cardiology, Endoscopy and Peripheral Interventions”.

Speaking at the event, IDA Ireland CEO Martin Shanahan said: “I was delighted to join Mike Mahoney, James Lyons and close to 800 of Boston Scientific’s workforce at the special town hall to mark the company’s 25th anniversary. Having a company of the stature of Boston Scientific operating in Galway, with a workforce of over 3,700 employees, is of enormous value to the economy of Galway and the wider West Region. Boston Scientific’s longevity demonstrates a huge commitment to Galway and Ireland and this further investment in a new facility to support existing and new business is testament to the company’s continued focus on innovation and excellence in medical technology.”

The opening of the new facility is part of a programme of celebrations for Boston Scientific’s 25th Anniversary in Galway. James Lyons, Vice President of Operations at Boston Scientific Galway, believes this is a great opportunity to mark the important contribution of its employees and the wider community in Galway as well as its industry partners.

“Given the scale of our campus and workforce here, the support of the wider community has been especially important. I would like to acknowledge the contribution in turn that our employees have made to the local community, including raising over €2.6m for local charities and organisations since 1994.”
James Lyons, Vice President of Operations at Boston Scientific Galway

Founded in 1979 and headquartered in Massachusetts, USA, Boston Scientific employs 32,000 employees worldwide. It is a global leader in the development of medical devices that impact 30 million patients every year.  As well as celebrating 25 years in Galway, Boston Scientific is also turning 40 this year and marking 40 years of transforming lives.

Boston Scientific transforms lives through innovative medical solutions that improve the health of patients around the world. As a global medical technology leader for 40 years, we advance science for life by providing a broad range of high performance solutions that address unmet patient needs and reduce the cost of healthcare.  For more information, visit www.bostonscientific.com and connect on Twitter and Facebook.